Blog - Latest News
You are here: Home / Informative / Dog and Cat Vomiting: When to Worry 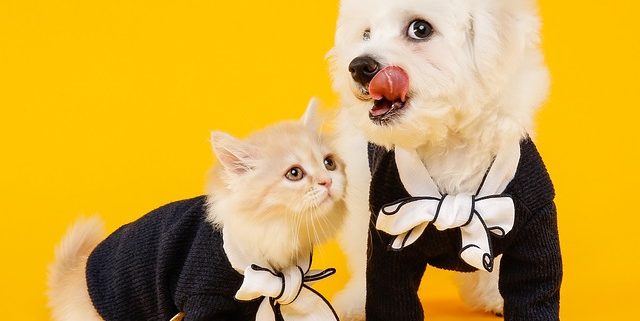 It’s a common problem that strikes pet owners everywhere, at any time. Maybe it happens after they eat a meal. Perhaps it happens in the middle of the night. It might occur randomly, frequently, and without any warning at all. You know the signs though; the drooling, the sounds of retching, and the inevitable mess to clean up afterward. However it may occur, pet vomiting is always a nasty surprise. However, when does it change from a mild nuisance and become something a bit more worrying? Knowing the danger signs of pet vomiting can help you know when to pick up the phone and make a vet appointment, or when to just pick up the cleaning supplies. Read below for a definitive guide on the types of vomiting and potential causes. 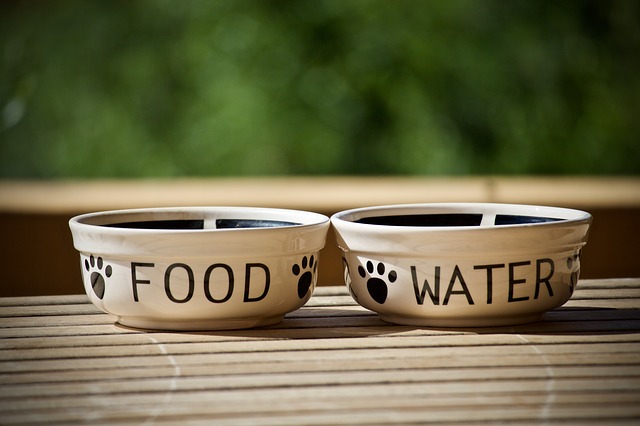 Types and Contents of Vomit

Not all vomit is considered true “vomit.” When a dog or a cat throws up, the type of contents and the way in which it is thrown up determines whether it’s vomit or just regurgitation. The difference has to do not only with what is being thrown up (digested or undigested food) but also with whether the abdomen is involved and there is heaving that occurs.

To tell the difference between vomit and regurgitation, look at what happens immediately prior to the appearance of the bile or food. If there is no warning (such as if the classic pre-vomit noises are absent, and there is no visible retching motion), and the food is undigested, the dog or cat has merely produced regurgitation. If the food is at least partially digested from the stomach or intestines, and the dog or cat heaves to produce it, it is defined as vomit.

It is important to know the difference because the causes of regurgitation and vomit are completely separate from one another, and knowing which one occurred will greatly affect a potential vet diagnosis.

If your dog or cats’ vomit is partially or almost wholly digested and also has visibile granules in it (sometimes with possible blood present in the vomit). These granules, when vomited, will have texture, consistency, and coloring similar to used coffee grounds. If there is blood present, the vomit might also have a dark brown or reddish tinge to it (be careful to distinguish this from red or brown colored food). Anytime there are signs of possible blood in your pet’s vomit, it’s best to schedule a trip to the vet sooner rather than later. Indicate to the clinic when making the appointment that your pet has possibly vomited blood.

If there is no food at all, and instead your dog is producing just liquid, there might be several different causes. Yellow-colored liquid could be bile and is indicative of a possible irritated stomach. More frequent feedings will help reduce irritation and soothe your pet’s stomach. If your dog or cat is producing white foam or heavy saliva, it might actually be a by-product of coughing, and not vomit at all. This is referred to as an “expectorate”, and has entirely separate potential causes from that which might cause vomit or regurgitation.

Ingestion of Bad Food: Dogs and cats may vomit after they’ve consumed something that they probably should not have. Vomit can result from something as simple as getting into the garbage can and eating last night’s leftovers, or vomit might mean that your pet has eaten something toxic (including but not limited to plants, toxic foods, or chemicals). Just like in humans, a pet’s body might react by trying to forcefully eject the contents of the stomach if whatever they’ve consumed is not recognized as a food item. If the cause of vomiting is simply gastric distress from something non-toxic, the vomiting should subside after the pet’s stomach is empty. 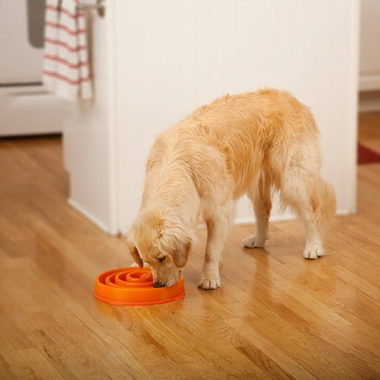 Timing and Amount of a Meal: Dogs and cats might vomit up a meal if they eat food too fast, or if they exercise immediately after a meal. In either case, you can slow your pet’s eating pace by
– Using special feeding bowls
– Staggering smaller quantities and feeding more frequently during the day
– Planning play-time for well after your pet has had time to digest
Any or all of these should stop any future episodes and are not a cause for concern.

Gastric Dilatation Volvulus: GDV (often known by the more common name of “bloat”), is an extremely dangerous condition that is caused when a dog’s stomach twists while it is full (of food, liquid or gas). Bloat is a serious condition that requires immediate veterinary intervention. If your dog is repeatedly vomiting but not producing any actual matter (often known as dry heaving), or just vomiting up amounts of foam, consider bloat as a possibility.

Organ disease: Vomiting isn’t always a result of a direct problem with food or eating. It may be a symptom of another disease, injury or anatomical problem. Diseases involving the kidneys, livers or pancreas of your pet may be tied into vomiting. If your pet is vomiting frequently without an obvious cause, consider that it could be a secondary symptom of an organ disease or injury and a trip to the vet is warranted.

Esophageal reflex: If your dog or cat is producing clear or slightly colored fluid (and not vomiting any digested or undigested food), the cause is less likely to be a problem in their stomach or intestines and more likely to be something wrong with another one of their body’s systems. If it happens repeatedly (especially if it seems to occur around mealtimes), it’s possible that it is a result of your pet suffering from possible esophageal reflex. This condition is similar to heartburn in humans, and requires a vet to diagnose and treat, but is not an emergency condition.

Worms: While unsettling, the appearance of worms in your puppy or kittens vomit after deworming is not actually an immediate cause for concern. If your pet begins to display other symptoms (such as lethargy, refusing to eat or drink, or a distended abdomen), an appointment should be made with your veterinarian.
Other conditions: There are a host of other problems that might cause chronic or frequent vomiting, such as food allergies, ulcers, various types of cancer, and canine parvovirus or feline panleukopenia. Any vomiting that cannot be easily explained (or that does not stop) should be further investigated

When to Call the Vet

If the vomiting is a one-time occurrence, there’s no need to schedule a trip to the vet just yet. It’s entirely likely that your pet’s stomach was simply upset that day due to their meal, exercise, or gastrointestinal stress or irritation. If you notice it linked to mealtime or a new food, consider adjusting your pet’s eating and playtime schedule to give them plenty of time to digest their breakfast, lunch or dinner.

If the vomiting happens frequently, there’s something more than just a simple upset stomach going on. Consider making an appointment to see your pet’s veterinarian. If bloating is suspected, immediately seek veterinary help from your veterinarian or a local emergency clinic. Pay attention to the color, consistency, and frequency of the vomit, so you can better describe it to your vet so that they may use the information in their diagnosis.

The best way to determine how your dog or cat is feeling is to let them tell you themselves; if they’re acting tired, dull, uninterested in playing or eating food or treats, these are all notable signs of concern and any one of them may indicate something more serious is going on with your pet’s health.

When you’re unsure of whether to make an appointment or not, remember that if your pet’s vomit is in any way unusual or cannot be easily explained due to stomach upset, it’s better to call your local vet for help.

What to do After an Incident

Other than the inevitable clean-up, after a vomiting event, you’ll want to temporarily limit food and treats to reduce irritation in the stomach and intestines (the likely cause of the vomiting). Consider restricting water for a short time as well, or you’ll risk a repeat incident. Be sure to reintroduce water early on when your pet begins to indicate that they’re feeling better to prevent further problems due to dehydration.

Whatever the reasons for your pet’s vomiting occurrences, knowing the types of vomiting that may occur, as well as some of the potential causes for vomiting will help you determine the severe incidents from the not-so-serious. This will aid you in deciding when to make an appointment or when to visit the emergency clinic. Keeping an eye on your pet’s overall health as a whole will also help you distinguish between the two, as well as provide valuable information to your vet when making a potential diagnosis. Having this knowledge will aid you in knowing if and when it is time to worry about your dog or cat’s vomiting.

Michael is a passionate writer and avid dog-lover, being a proud dad to two beagles and a golden retriever. He treasures playtime with his furry best friends. Michael specializes in dog health, and has worked as a volunteer at an animal shelter for two years before becoming a regular content creator for PawLabs.

Recognizing Signs of Anxiety in Cats

What Dental Conditions Should I Look For In My Dog?
Scroll to top