Bearded dragons may sound fearsome, but they’re actually one of the most popular lizards kept as pets in the UK. The scientific name for bearded dragons is Pogona, but they are often affectionately referred to as ‘beardies’ by people who own them.

Bearded dragons also have newfound fame in the internet age. As pictures of them ‘smiling’ are shared over social media, and YouTube; reptiles are shared by doing all kinds of strange and hilarious things. 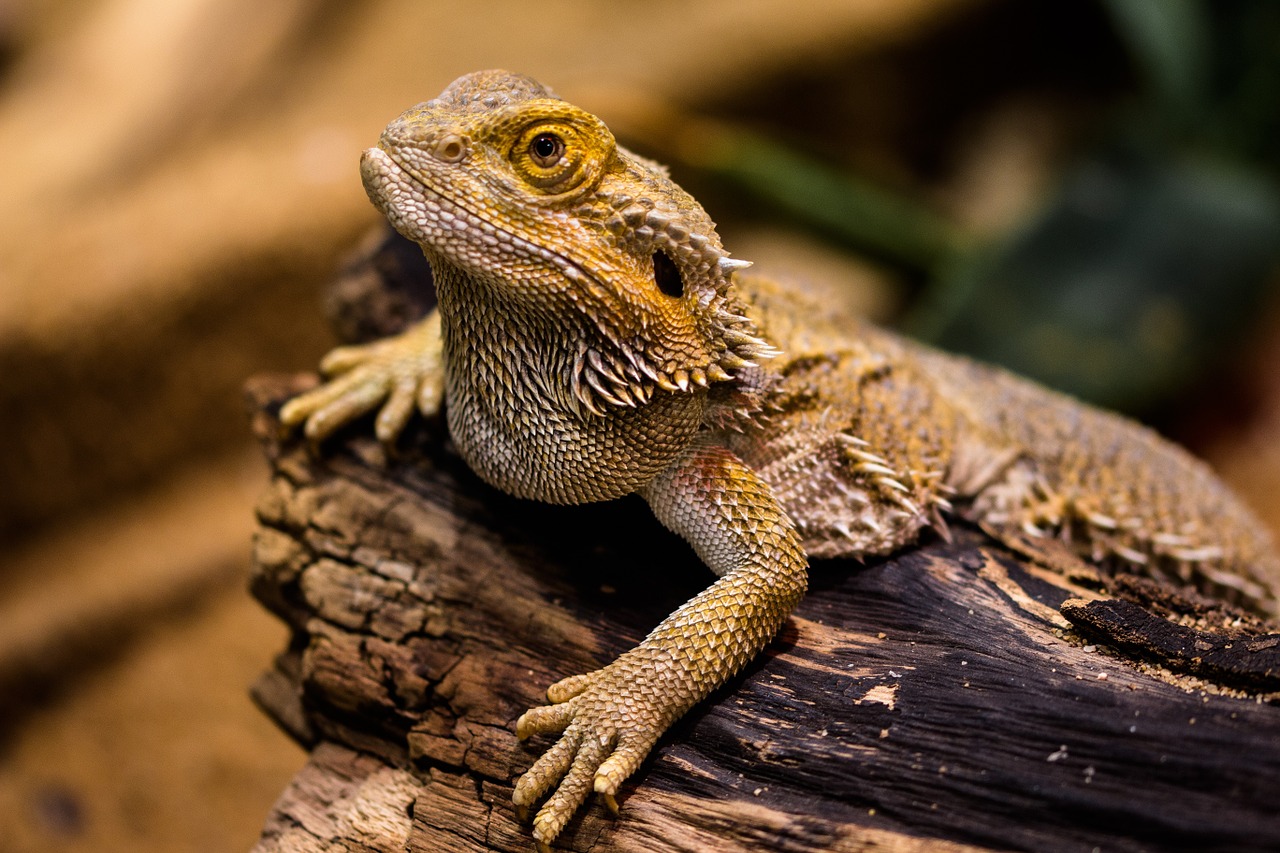 Where Did They Come From?

Bearded dragons are native to Australia but live in a range of different habitats, including deserts, shrublands, and woodlands. They were first introduced to the US around 1990, and fast became the exotic pet of choice for many Americans. 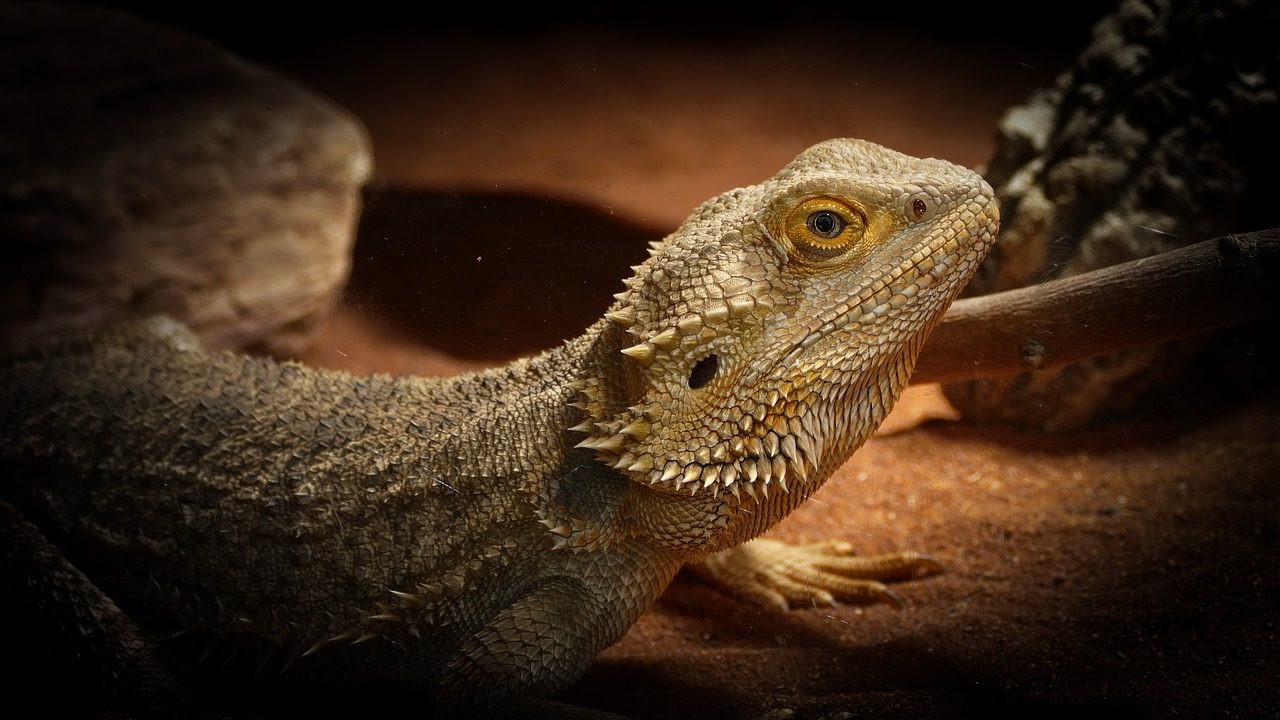 Bearded dragons make great pets. They’re easy-going, non-aggressive creatures that don’t mind being handled; and they’ve got loads of personality to boot. They do need the right setup, however, which includes a large vivarium, basking lamps, UVB lights and insects to eat. While keeping a bearded dragon is a substantial investment at first; they’re very low-maintenance creatures and will develop their own routine.

Here are 10 fun facts about these surprisingly charming pets:

1. Their name comes from the ‘beard’ of spiny scales around their necks

Bearded dragons don’t actually have beards, but they do have spiny scales underneath their necks. These scales puff out while opening their mouths as a mating display, or a defense mechanism towards predators. When the scales flare out as a mating call, these spines change color and become black. This gives the dragon the appearance of having a beard!

2. They wave to each other

Just like us, bearded dragons will wave when they see someone familiar. This wave is to communicate passivity or submission when they are in the presence of a larger, more dominant dragon. Many bearded dragon owners have reported their bearded dragons waving to them. There are plenty of videos online that have captured this adorable behavior. 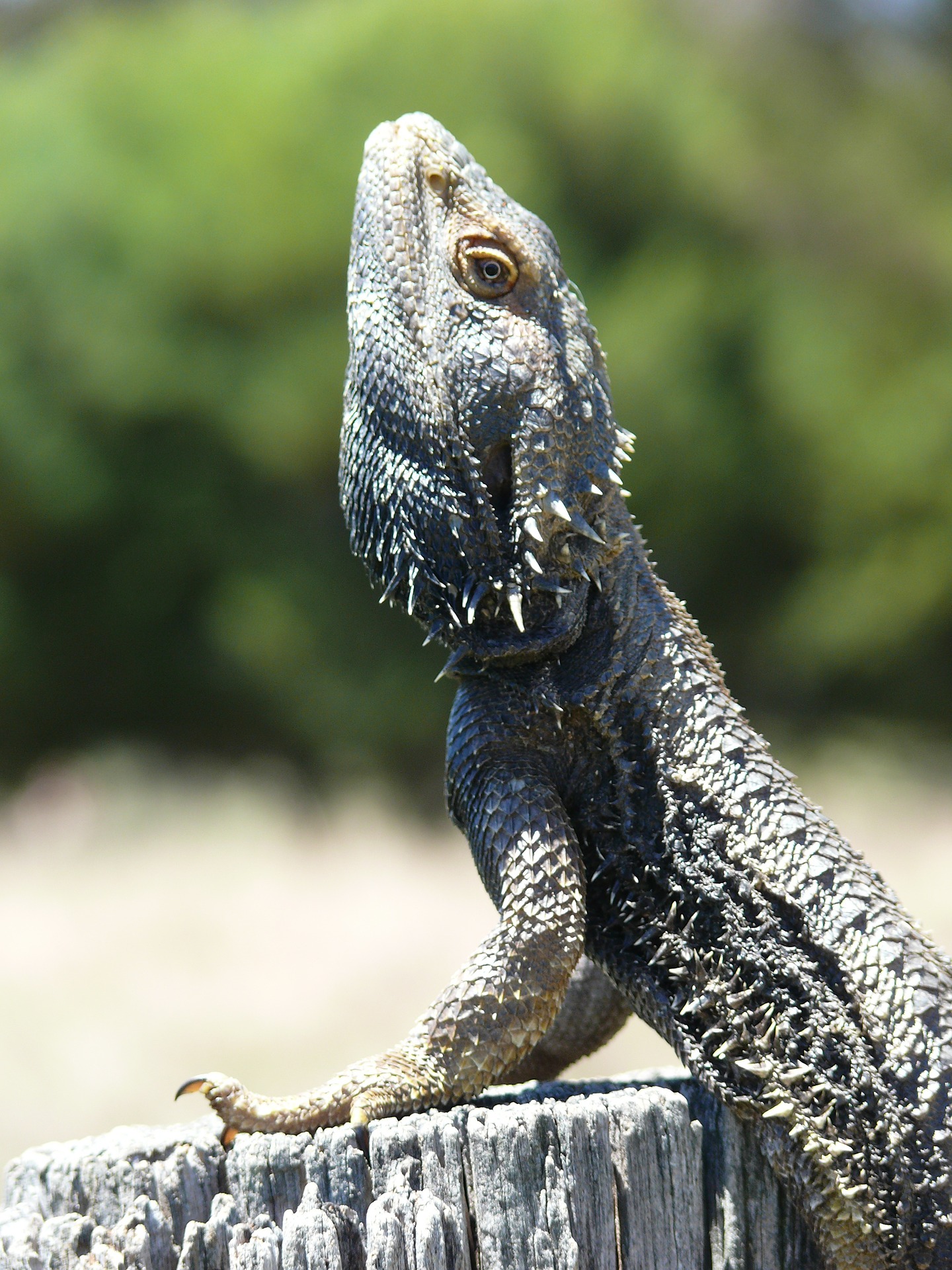 In addition to the waving, bearded dragons have quite a few other interesting behaviors. For example, a quick Google search will show many pictures of bearded dragons laid out in their vivariums as if they are sunbathing on the beach, waiting for their photo to be taken.

The trademark movement of a bearded dragon, however, is the head bob. Both males and females do this, usually in mating season, though the behavior is thought to be used as a sign of dominance between males competing for mates or territory. In the wild, bearded dragons may even lie on top of each other to display dominance, and to soak up more UV rays from the sun.

Bearded dragons are mostly calm and sedentary and can be found sunbathing most of the time (although in their world it’s called basking). However, they are deceptively quick and are capable of running at speeds of up to 9mph. They are also one of the easiest lizards to train to be walked on a leash, so a walk around your local park isn’t out of the question – you’ll just have to be able to keep up if your bearded dragon spots some food in the distance and shoots off without you.

Despite living in quite dry and arid conditions in the wild, bearded dragons do enjoy the water. Some are content to just lie in shallow pools of water while they bask or as a break from the heat, but others actually go for a swim and are content to paddle around for a while as a break from their normal routine. They inflate themselves with air to help with their buoyancy, and their swimming motion is similar to that of a crocodile.

6. Their teeth grow back

Some lizards can regrow lost tails or even limbs but, unfortunately, bearded dragons cannot. They can, however, regrow their teeth. Bearded dragons sometimes lose their front teeth in the process of trying to catch prey or tear apart food, but these will regrow. The teeth at the back and sides of the dragon’s mouth are permanent, but these front teeth may be regularly shed and re-grown throughout the bearded dragon’s life, much like the way they shed their skin.

7. They can sleep standing up 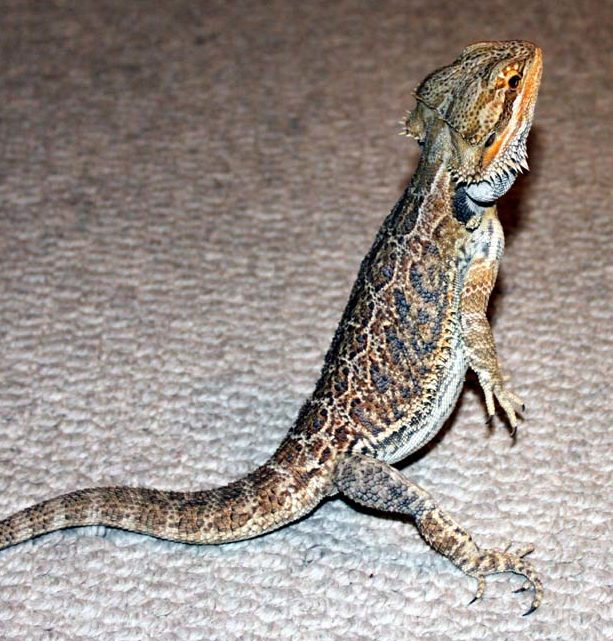 This one needs to be seen to be believed, but bearded dragons will sometimes sleep stood up on their hind legs. They will often be leaned against something like the corner of the vivarium or the foliage within it, but it’s certainly a strange sight. You can also buy hammocks for your bearded dragon’s vivarium which they will sleep in for a more comfortable and human-looking night’s rest.

8. They can run on two legs

Bearded dragons have the ability to lock their hind legs which is why they can stand (and sleep while standing), but they can move like this too. It is believed that this happens because of an evolutionary fault. While running, a bearded dragon’s center of gravity is moved towards the back of the animal which makes it quicker and more maneuverable, but it also means that when they pick up enough speed, they can’t keep their front feet on the ground and essentially ‘lift-off,’ continuing to run upright.

9. Their scales tell their mood 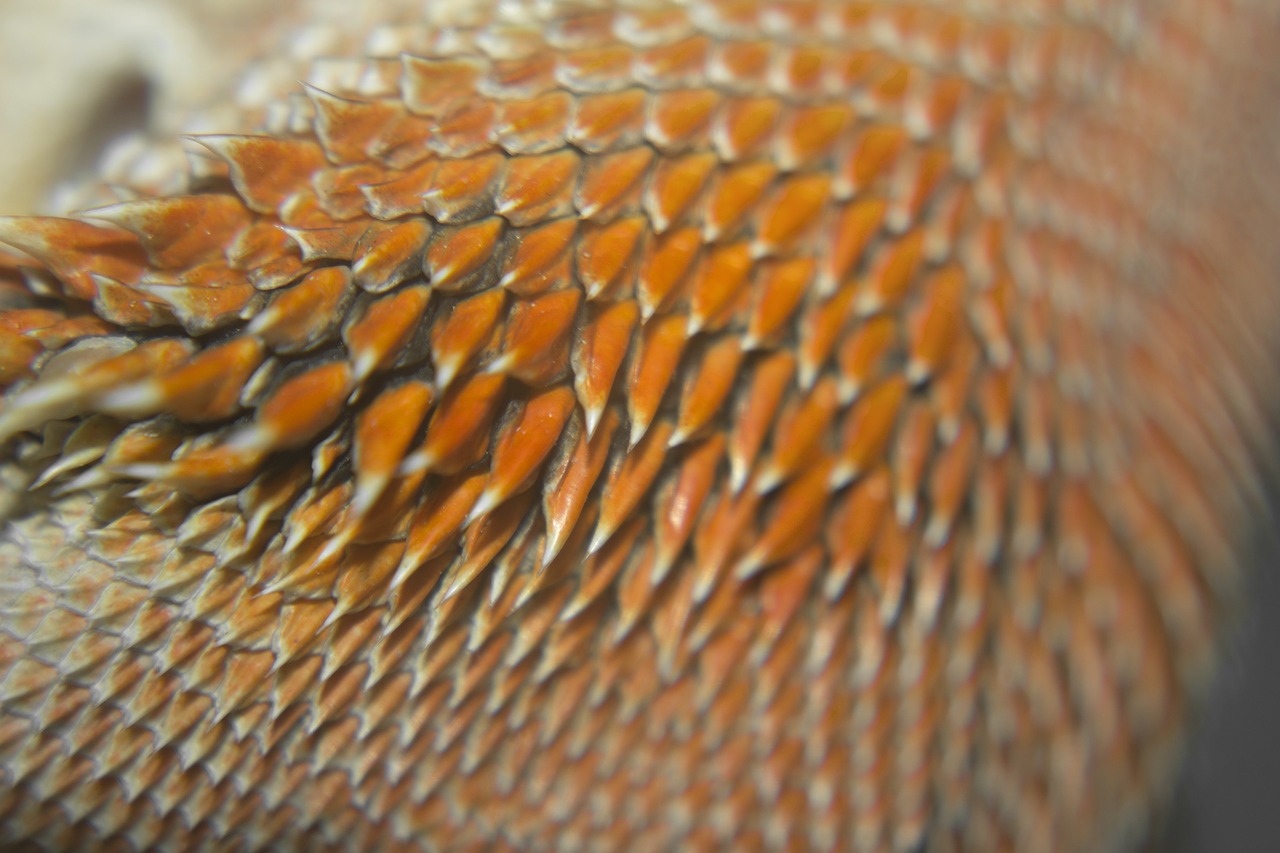 Taking ‘body language’ to an entirely new level, bearded dragons can convey their emotions by changing their scales. As well as their trademark puffed-out throats, bearded dragons’ scales will become tense and spiky when they are stressed. On the other hand, if they are relaxed, their scales will sit much flatter and be smooth to the touch. Their beards may also turn black if they are feeling stressed out or threatened, as well as when they are preparing to mate.

10. They can change color

As well as their ‘beards’ turning black, bearded dragons can change the color of the rest of their skin too. This isn’t as obvious as with a reptile like a chameleon, but the phenomenon can still be a surprise for owners. Because bearded dragons shed their skin throughout their lifetime, it is possible for the newly-revealed skin to be a different color. 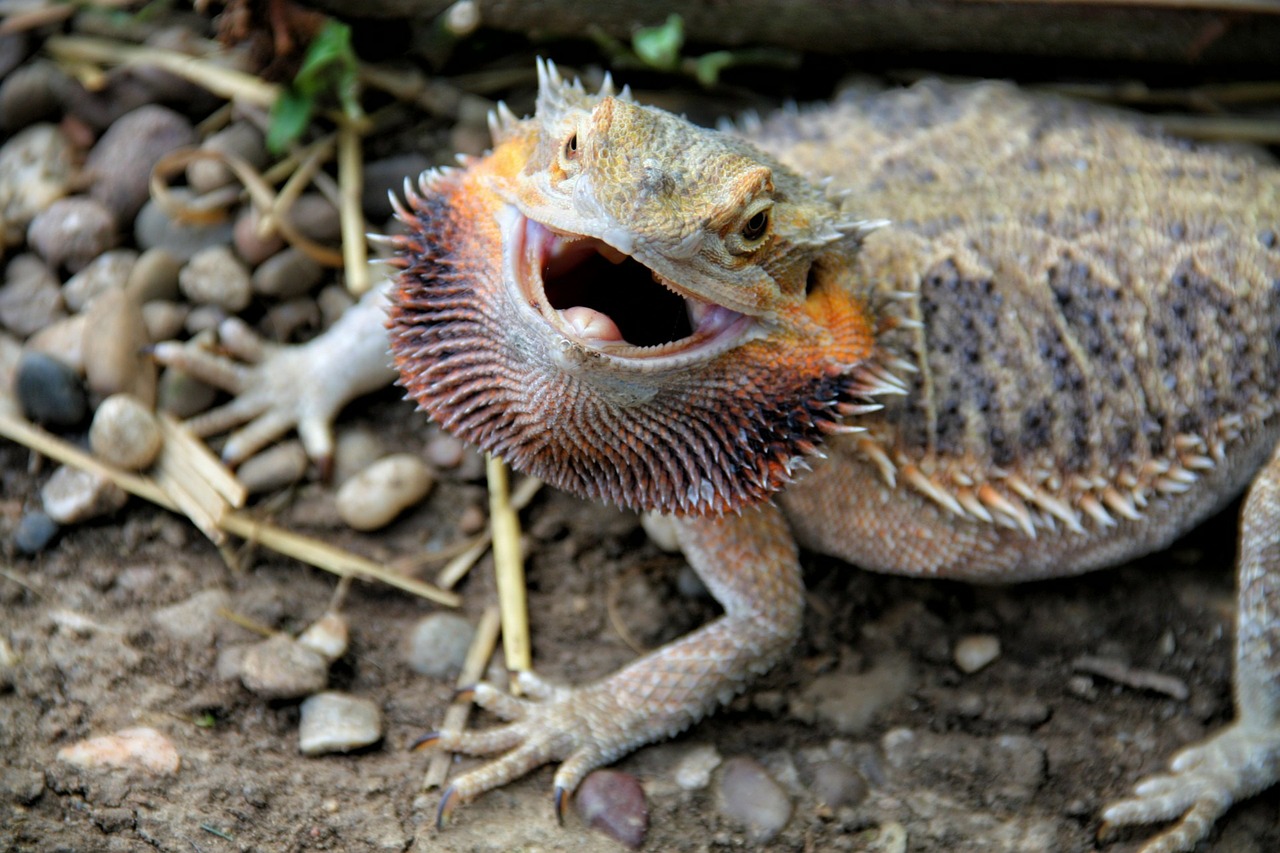 Bearded dragons are incredibly interesting, unique creatures, and make great pets – even for people who would have never considered housing a reptile.

A bonus fun fact about these animals is that they have to be the most photogenic lizards on the planet. While they have biological reasons for the weird and wonderful things they do, their ‘posing’ seems to copy many human behaviors. They wave, they run on two legs, and when they are regulating their body temperature, they ‘gape,’ meaning they leave their mouths wide open – it looks just like they are smiling at you! That’s why you see so many images online of bearded dragons who look thrilled to be having their picture taken.

Whether or not you have any intention of owning a bearded dragon, it’s hard to deny that they are truly fascinating creatures.

SynergyVets is a dedicated veterinary recruitment agency, with almost 30 years of collective experience supporting the profession with locum and permanent personnel. They have a great blog which, alongside advice for veterinary candidates, includes useful animal care tips for pet owners.

How to Protect and Care for your Cat’s Liver Cells